Updates on the American Webcasting Crisis 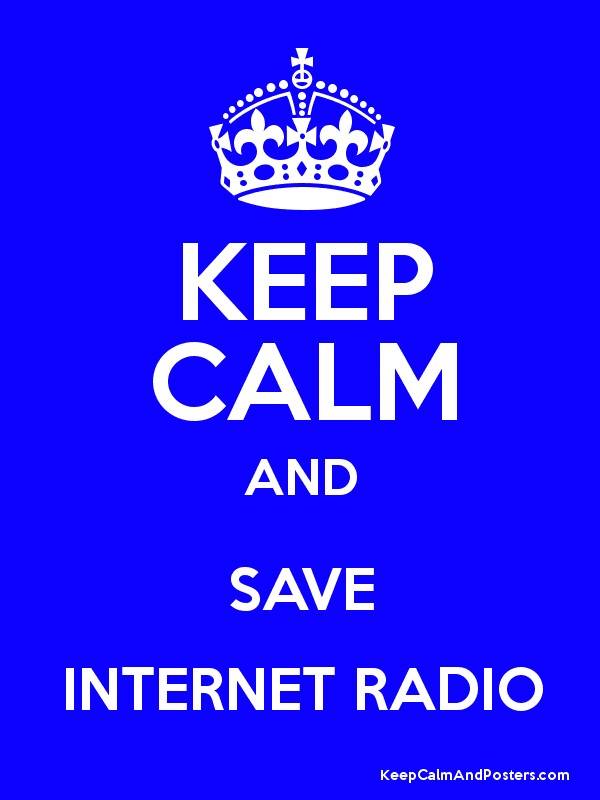 (The following are updates to our Rebuffering column Kissing American Dreams Good-bye. This is a running document, cataloguing developments as we become aware of them.)

o     An online petition to the US Congress now exists here.

o     The Internet Radio Broadcasting Facebook page is Information Central on this and other matters affecting Net radio.

o     A new website addressing activism on this issue has appeared at savenetradio.info.

o     As of 18 January 2016, Streamlicensing LLC has posted new rates for a monthly music license. An example: a station with the mid-range audience reach of 10,000 ATH (Aggregated Tuning Hours) and revenue of less than $20 US per month (typical of the great majority of American Net radio stations), will pay $109.32 US per month in licensing. Previously, the same station paid under $30.

o     Streamlicensing LLC's Marvin Glass has issued a Call to Action to all of his clients, and anyone else who supports American Net radio. Read it here.

o     Save Internet Radio now has several ready-made public service announcements to educate listeners and encourage them to act on behalf of American Net radio. If you're a producer, download them here and stream them in regular rotation.

o     Streamlicensing LLC has also issued a public service announcement that producers may download and stream, free of charge. Get it here.

o     US Government Officially Denies Small Webcaster Royalty Pleas. The news is in, and it isn't good.

o     Internet Radio 2016  Jowanna Lewis explains what's at stake and why ordinary people should care about it. (YouTube.)

o     Don't Let It Go JoyfulPerspective contrasts the honourable intent of the new law with its devastating effect. A fundamental though seldom-addressed aspect of the fiasco. (YouTube.)

o     Small Webcasters Are Squeezed By Music Rates (Radio World). "Experts contacted for this story said the number [of stations wiped out by the CRB decision] could be in the hundreds or even thousands."

o     Now Big Music is gunning for Radionomy, the last refuge of small webcasting in America. Read about it here.

o     Eminent radio personality Bobby Ocean calls out the toxic effect of the CRB liability decision on American media and music. (This is a Facebook link; readers who don't have an account, or are not logged in, may have difficulty loading it.)

o     On Radio Survivor: LPFM Watch: How Internet Radio Royalty Rates Affect Low-Power Stations. While as broadcast stations they fall outside the purview of much of the CRB decision, it does impact LPFM negatively, and may affect their ability to stream their broadcasts.

o     Also on RS: Will Performance Royalties Create a New Class of Radio Pirate? "Thousands of internet radio stations have gone silent in 2016, while thousands more may yet shut down, primarily because of new performance royalty fees that have skyrocketed for small and mid-sized internet radio stations. In this piece I explore how this challenge might encourage some webcasters to give up complying with the law and simply stop paying royalties altogether."

o     Vince Wylde of The Vince Wylde Show says it's TIME TO PICK A FIGHT: The RIAA – Time To End The Music Blackout.

o     Perhaps the most informative part of Radioworld's RIP Live365 is the comments after the short article. People really were listening and enjoying, and had been for years. Though still a fringe movement, Net radio was clearly up and coming in the States.

o     In “Bloody Sunday” decimates Internet radio, Kurt Hanson reports specific examples of the chilling effect of the CRB decision on American Net radio scene as of 1 February. In spite of a 15% spike in listenership for his own AccuRadio service, he says, "the net result of these decisions is that Internet radio is in the process of losing much of its depth and diversity."

o     Will the CRB decision help artists, or just big business? Citizens for Responsibility and Ethics in Washington are sceptical.

o     How do the current changes in 2016 liability figures augur for SoundExchange profits, and therefore artist income and general development of the music industry? Not well, says XAPPmedia.

o     On Music 3.0, Bobby Owsinski says of the ruling that "musicians and songwriters now make marginally more, but to what end? If there are fewer outlets for your music, there seems like no winner in this decision, but many with a lot to lose."

o     In Tough Month for Streaming, Corey Deitz concludes: "Internet Radio is quickly becoming the domain of the corporations. The little guy is simply being pushed out."

o     Gospel enthusiasts represent a large chunk of Net radio producers and listeners in the US, and on the Gospel Synergy website, Fred Willis makes the case for activism in Why is gospel music oblivious to the CRB ruling and its devastating effect?.

o     It’s the 13th Hour for Small Webcasters, says Radio Survivor. The latest edition of their podcast (#31) includes an interview with Paul Merrell of StreamLicensing.com on ways that company is confronting the challenge. Afterward, RS explores the efforts to date to resolve the stalemate between small internet stations and copyright authorities. Probably the most thorough and incisive exploration of the situation to date.

o     In Has a Royalty Change Doomed Small Webcasters?, Pitchfork.com's Marc Hogan addresses the importance of small webcasters to musicians and their public, and catalogues statements of support from the broadcasting and independent music communities. An example: "Having a diversity of webcasting platforms is very important to consumers, to artists and to culture at large. Our music ecosystem needs small and medium-sized webcasters." (Darius Van Arman, Secretly Group.)

o     Gary Wien makes a cogent, data-driven point about the losers here (spoiler: pretty much everybody but music industry executives) in The Death of Internet Radio: Why Musicians Should Be Furious At The Music Industry.

o     'Way back in 2002, singer-songwriter Janis Ian blew the roof off the music industry with her still-definitive The Internet Debacle: An Alternative View. The article is a bit dated technologically (back then the main issue was Napster), but her moral and commercial points remain entirely relevant. Sad comment on the state of American jurisprudence, perhaps, but an excellent resource for us. (Also a source of really choice comments on the music industry, from an unimpeachable source.)

o     See also Ian's Fallout, on the response to her first article.

o     Mouse House Radio has posted the call to arms that Marvin Glass, director of Streamlicensing LLC, sent to affiliates on 23 January 2016.

o     TV Comedy writer Ken Levine explains the math in The little guys get screwed again: "At a time when three or four horribly run, close-to-bankrupt conglomerates own 90% of terrestrial radio and have turned it into a cesspool of commercials, automated voice tracks, syndicated programs, and infomercials – the only real variety were these internet radio stations."

o    Radiodiversity.org seeks to unite artists and Net radio producers in the effort to overturn the current CRB decision and replace it with a royalty schedule that supports further development of both the arts and Internet media.

o     Live365, a cornerstone of American Net radio that hosted hundreds of small stations, has announced that it's closing its doors on 31 January 2016. Story here.

o     In the Global Tribune's ‘You’re Gonna Miss Me When I’m Gone’: Why the recording industry needs internet radio, indie music promoter Fred Willis makes a clear and cogent argument for Net radio's crucial role in the continuing development and diversification of the music business.

o     See also Fred's The CRB Ruling and the Inadvertent Resurgence of Payola, also from the Global Tribune.

o     On the This Week in Radio Tech podcast, John Stephens of theroots.fm talks about the dramatic rate of Net radio station closures precipitated by the CRB decision and his own outfit's struggle to remain on-stream. (Link to YouTube video version.)

o     Radio Survivor Podcast #28 – Will 2016 Be the End of Indie Internet Radio? In his cautious, responsible way, Paul Riismandel, author of the excellent Radio Survivor article linked below, discusses the ways that the CRB decision endangers the existence of Net radio in the US and how it endangers artists.

o     In My take on the new royalty rates for internet radio, David Porter of 8tracks acknowledges that the new rate structure eliminates competition to music streaming services by suppressing independent stations, and explains how this is accomplished.

o     The New York Times covers the death of WKCR - Columbia University's simul-stream, a vital part of its overall service

o     In Joel Salkowitz Shutters 'Pulse 87' Because Of The New Royalty Rate On Small Webcasters, All Access Music Group talks to veteran small webcasters about the decision and its consequences.

o     Paul Riismandel, of the Radio Survivor blog and podcast, has uploaded an excellent, well-researched, and thorough article on the CRB decision and its potential effect on American webcasters here.

o     A 40-minute webinar from Triton Marketing, in which copyright attorney David Oxenford explains the provisions and ramifications of the new CRB ruling, can be found here. In the course of this audio stream, Oxenford directly addresses the impact on multiple categories of Internet media, including small webcasters.

o    The Top 22's Paul Marszalek speculates on the origins of this decision here, and its potential cost to American arts and entertainment here.

o     A thorough review of the situation can be found here, from Radio and Internet News.

o     Radio Swing Worldwide of Bellaire, Texas, announced on 30 December 2015 that it would soon go 404. As of 1 January 2016 it's still streaming... but not swing. Station owner Harold Levine, who runs a whole stable of Net radio stations, says he is trying to find a way to keep them live and on-format, in the face of liability expenses that have suddenly jumped to 10 times their former level. For more information, see the Radio Swing Worldwide Facebook page.

o     Update on the above: Radio Swing Worldwide is in the process of pursuing nonprofit status, with an eye to gaining access to more affordable royalty rates.

o     As of 30 December, in anticipation of the loss of small-webcaster licences that will take effect 1 January 2016, American livestream platform Live365 has apparently closed its doors, threatening hundreds of American Net radio stations. (Story here.) Producers streaming on other servers have noticed a pronounced uptick in their analytics; there is speculation that this may be a result of Live365 station closures.

o     Please inform us of US Net radio stations posting 404 notices, withdrawing or pay-gating streams, or geo-locking American listeners out of their stream. Stations reported to date include:

Stations geo-blocking the US until further notice: